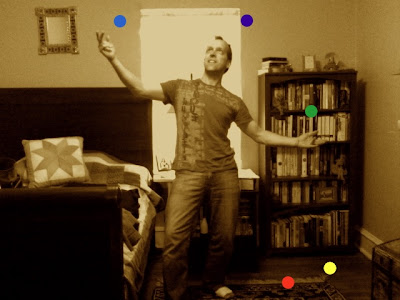 Lo, it is quite challenging for my Type A, "I can do it all" Superman mentality to welcome the forced prioritizing  that comes with completing a dissertation.  It is difficult to gracefully accept that some of the multi-colored balls I try to juggle (or the plates I spin) must meet the pavement in sacrifice to the greater good.

Hardwood floors gather dirt, dust and dog hair as I spend my weekends doing quick "sweeps" with my socks whilst walking through the dining room with a coffee cup trying to construct the perfect sentence to describe the way culture influences reading development.

The sorrowful tap of my wee little blog standing out in the rain looking in through a misty window waiting for an invitation to enter.

I suppose that's why vacations were invented.  To catch up on all of the things we neglected during our dawn to dusk ritual of daily living.

NYC teachers are just entering into spring break with seven school days off to pick up the discarded balls and cracked plates.  That amounts to one, large collective sigh of relief.

My plan is to complete the proposal for my dissertation which I have been writing, revising and editing since September.  It is a slow, arduous task but one that has been buoyed by the advice of my friend Nancy who told me to take it bird by bird.

Eventually I will reach my destination.  I wonder what I will find once I arrive.  I imagine I will continue walking towards yet another unexplored land.  But for a while it'll be nice to view my surroundings from a spotless home full of friends and family.

My kindergarten students continue to enchant and delight me with their tenacity and joy.  They greet each challenge, which we present daily, with eagerness, determination and pride.  Each child puts forth his or her best effort to complete the task before them.

For the past month we have been engaged in a social studies unit focusing on the following areas; geography, maps and map reading skills and time, continuity and change.  We combined this with the Common Core writing objective requiring each child to "use a combination of drawing, dictating, and writing to compose opinion pieces in which they tell a reader the topic they are writing about and state an opinion".  In kindergarten the children are not required to provide a reason for their opinion (to state one is enough) but almost all of our students have successfully risen above this expectation.  Truly incredible.

We decided to approach the standards by examining the five boroughs of New York City.  This started with a look at the map and identifying which borough each student lives in.  Since we are not a neighborhood school we have students from each borough attending our school.  Although, oddly enough, our class does not have anyone from Queens.  We added this information to a large map and then began exploring New York City though children's literature. 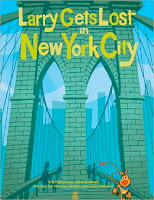 We found several books that worked well as an introduction but I am particularly smitten with Larry Gets Lost in New York City by Michael Mullin and John Skewes.  This book is both fiction and nonfiction and chock full of New York City landmarks.

The books helped us create a semantic map of important Manhattan landmarks from which the students chose one to write about using opinion words such as "like" and "think".  They wrote about Central Park, Times Square, Rockefeller Center, the United Nations, Madison Square Garden, The Empire State Building, Grand Central Station, The Metropolitan Museum and The Museum of Natural History.

We have started a binder filled with a collection of their opinion writing pieces and plan a big party when the unit is completed.

The children certainly give us so much to celebrate! 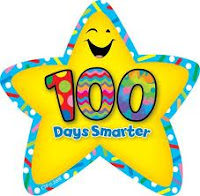 It was a fun filled morning with the kindergarten and first grade classes coming together to explore 100 through hands-on activities, movement and food.

It took some planning to coordinate the 2-hour event but the effort was well worth it.  We started the morning by gathering the children together to explain how the day would unfold.  Six stations were set up in three classrooms and the students had 20 minutes to play, move and gather treats at each one.