It was a dark and stormy night...

There are as many ways to begin a story as there are stories. It is said that everyone has a story, but, truly, everyone has many stories. Stories and storytelling are woven into our DNA. They are an integral part of being human. They are the reason Homo sapiens have survived and prospered when other species of man have not. It is our ability to gossip and share information that allows us to work together in large groups (learn more about all this by clicking here).

The power of storytelling cannot, and should not, be undervalued.

Through the ages man has shared stories in many different ways. That progression has been skillfully rendered by Dan Yaccarino in his children's book I AM A STORY.

I asked Kim Weild to read Dan's book during her Broadway Books First Class guest artist visit because Kim has dedicated her life to telling stories. The stories she tells are often stories of those whose voices are easily overlooked by society. It is through one of those stories that I introduced Kim to my first grade students.

In 2017, she teamed with playwright Charles Mee Jr. to direct his play SOOT AND SPIT about the life and art of James Castle. James was born deaf into a poor Idaho farming family in 1899. He was also autistic, and most likely dyslexic. His childhood was isolated and lonely. Yet, he found a way to communicate. He told stories through his art.

It was his art that I studied for a week with my students in preparation for Kim's visit.

As D/deaf and CODA/SODA children (CODA/SODA = Children or Siblings of Deaf individuals), my students have firsthand knowledge of the joys and struggles associated with deafness. Even without that background, they could empathize with feelings of right and wrong elicited from James Castle's drawings. 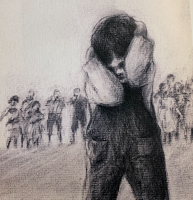 We began with this image of young James being taunted by his classmates. James used soot and spit to create his art on scraps of paper taken from the trash. Such was his need to express his thoughts and feelings because, as a child without language, his ability to communicate was limited.

His story could have easily fallen through the cracks for us, if it weren't for Kim Weild shining a light on it. His story stayed with the students long after Kim's visit. As I write this, her visit is already 5 weeks in the past, yet a student referenced James Castle this week when we read the book Drawn Together by Minh Le and Dan Santat. She stated that the characters in that book used art to communicate "Just like James Castle tried to do."  Yes! A wonderful connection - exactly right!

We followed our week-long study of James Castle's art by studying another project spearheaded by Kim. It was a 2016 storytelling workshop with the students at our school, which culminated in a book and a show called HOW THE I BECOMES THE WE.

Here, Kim facilitated a series of workshops for children in Grades 1-3 highlighting different ways to tell a story. They included ASL Alphabet Handshape Stories, The Physical Embodiment of Story, and Writing/Drawing. This was through her theater company Our Voices. A company that is "dedicated to investigating themes of otherness in society whether they are culture, language, gender, sexual orientation/identification or ability." In short, telling everyone's story.

The embrace of diversity and respect for others had the children wondering...

Why did Kim like to tell stories so much?

How did her job as a director help her tell stories?

They also had questions about specific shows. One was related to the Broadway show AMAZING GRACE (Kim was Associate Director). It is a story loosely based on the life of John Newton, an English slave trader who later became an Anglican priest and eventually an abolitionist. He wrote many hymns, including Amazing Grace. One student asked Kim, "Why did the main character in the show change his mind? (about slavery)." This led to some rather deep discussions in class and with Kim. 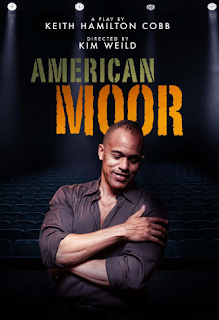 They also were curious about her experience working with Keith Hamilton Cobb on AMERICAN MOOR. This is another powerful show "examining the experience and perspective of black men in America through the metaphor of William Shakespeare's character, Othello."
The conversations built upon one another. Each helping to create background knowledge, which provided context for understanding. All this through the content of theatrical shows. All of this through storytelling!
I found it incredible.
After we signed off of our Zoom meeting with Kim the children began writing their thank you cards. One student veered from this to make a sign highlighting the message she took away from Kim's visit.
THE WORLD NEEDS YOUR STORY!
And then she added, I LOVE THAT! 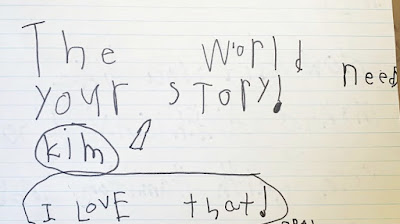