Screeches bounded forth from 20 kindergarteners - and several adults - at the prodding of John Treacy Egan and Jason Simon as they read aloud from their Halloween themed children's book INGREDIENTS FOR A WITCH.

There is a misconception that deaf/hard of hearing children are silent, quiet individuals. Anyone passing by our classroom as the sound of cackling, witchy laughter rattled the windows could attest to the fact that this is not the case. The mood was loud, joyous, and festive as we traveled into Halloween Hills with John and Jason's enchanting characters: Witch Betty, Boney Jones, and Pumpkin. There is nothing quite like the palpable energy surrounding a good story - especially one with skeletons, witches, talking cats, and magic spells.

The lure of storytelling cannot be denied. It has roots in tales told throughout the ages around a communal hearth and has morphed through time to reflect societal advances. Stories continue to capture the imagination with digital technology, virtual reality, and other interactive enticements. However, nothing beats a master storyteller playing to a specific audience, skillfully drawing them in and guiding them through the ups and downs of the hero's journey. And we had not one, but two such storytellers visit us in early October.


It was the perfect way to kick off Year Five of Broadway Books First Class. The program, originally conceived as a celebration of literacy and the Arts for students in first grade, has grown to encompass children in preK through fifth grade. This year, I'm teaching kindergarten. The children are brilliant, funny, and engaged, but they are also moody, distractible, and, well...very young.

As always when I begin a new school year with a fresh group of students, especially ones this little, I worry and wonder about how they will respond to Broadway guest artists, read alouds, and in-depth discussions around themes relating to such topics as diversity, acceptance, and collaboration. Will they embrace the visits? Will they be engaged? Will they feel a sense of pride and importance because these artists chose to spend a morning with them? Will the lessons permeate their everyday lives? Will they love the books they get to take home after each visit and read them again and again? Will they become more motivated, skillful readers as a result? In short, will my hopes and dreams for the program take root within them and grow exponentially into something meaningful?

And, thankfully, each year the answer has been yes. Perhaps it's because of the angst that fuels careful preparation or perhaps it's because I've been fortunate enough to have an angel looking over my program. And in true theatrical fashion, this angel on the catwalk is a celebrated Broadway performer with three Tony Award nominations - Mary Testa!

Mary Testa stepped in three years ago amid my growing concerns about returning to teach preschool and what it would mean for the program. She introduced me to Tony Award nominee Jonathan Freeman, who is best known to children for playing Jafar in Disney's Aladdin. Jonathan was a guest artist tailor made for my younger students and his participation ushered in a splendidly exciting year for all of us.


Mary came through again this year by introducing me to John Treacy Egan, whose role as Chef Louis in Disney's The Little Mermaid served to pique the interest of my kindergarteners. In preparing for his visit I shared an amusing video of John in character, preparing his culinary delights while chopping and deboning our friends from under the sea. The action is humorous in its buffoonery and elicited gasps and giggles from the children. In short, they were hooked - perfect! 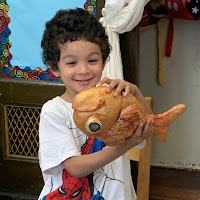 There were even more delighted when he brought in a prototype for the prop fish used in the show. Students got to dismantle, reassemble, and play with it as they passed it around the room. John even sang us an energetic a cappella chorus of "Les Poissons" (with a fantastic ASL interpretation by Tavoria Kellam).

Later, as John "the scribe" answered questions about his Broadway career and his children's book Ingredients for a Witch - it is inspired by his musical for children called The Real Wicked Witches of Halloween Hills - Jason 'the scribbler" drew us a picture of Pumpkin, the cat, to hang in our classroom. However, the gifts didn't stop there.


They brought along bookmarks featuring their enchanting characters with sayings like, "READING can be MAGICAL!", "HEY! Who wants to READ?" and "BACK OFF! I'M READING HERE!" There were also coloring pages, which we saved and colored on Halloween, and books! Every child took home a book signed by both John and Jason.

I'm told there is a second book planned in the series and we are all looking forward to John and Jason's return next year. By then, the children will be a little bit older and will take away new things from the experience. But, just like this year, we will all celebrate reading and getting lost in a good story.

Thank you John Treacy Egan and Jason Simon for a wonderful morning!
Posted by Gary at 9:08 PM No comments: