I am energized and excited. I'm entering my 24th year as an educator! I'll be teaching kindergarten in a new room - well, I spent 5 years in this room, but that was years ago - with a new team teacher and a class of fantastic, adorable, fun students. Lucky me!

I've spent the past few days moving in and setting up. Here is pictorial documentation of the process.


As a young performer I believed the path to finding work in the theatre involved standing in an audition room singing 16 bars, doing a monologue, or reading sides. Later I learned - from friends like Molly Shannon and Charles Busch - that the traditional route of waiting for someone to cast you doesn't work for everyone. Sometimes you have to create your own opportunities. You gotta hustle a bit.

This enterprising spirit is very much alive in Wesley Taylor.

He first came to my attention with the web series It Could Be Worse (now available on Hulu). Wesley created, cowrote, and starred in this comedy, which was inspired by real stories from his life as an actor.

It also starred brilliant two-time Tony Award nominee, Alison Fraser. The cameo roles on the series showcased a who's who of Broadway names. It's nice to have talented, famous friends who can help you realize your vision.

Several years later I went to see SpongeBob SquarePants at the Palace Theatre on Broadway. My focus that evening was on cast member Oneika Phillips. Oneika had been a guest artist with Broadway Books First Class and I was there to show my love and support. The show was a joyous, high-speed adventure set in the underwater world of Bikini Bottom. The characters were larger than life, full of emotion and inner conflict. As I watched I was especially taken with Sheldon Plankton. He was deliciously diabolical. The actor playing him milked the role for every humorous drop of deplorable depravity. He seemed to be having so much fun the audience could not resit falling in love.

I read the Playbill when I got home and learned that the role was played by Wesley Taylor. It was then that I knew I wanted him to be a guest artist in my program. And thanks to Oneika, he accepted my invitation. 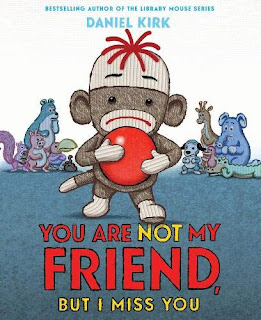 It took a bit of searching to find the perfect children's book for him to read. I wanted something to mirror Wesley's childlike energy, his charming arrogance, his gigantic heart, and his sweet vulnerability. I found it in You Are Not My Friend, But I Miss You by Daniel Kirk. It is the story of an adorable, pouty sock monkey with a red ball, who learns an important lesson about friendship. Wesley's main audience for the reading would be a group of preschool children, so this picture book was perfect. The message about sharing was one I could revisit again and again. And because each child would take home a copy of the book autographed by Wesley, I knew their parents would appreciate the message as well.

As I always do when preparing for a guest artist, I asked Wesley for a photograph of himself as a child. He did one better - he shared a video! It seems he's always had a bit of a performer in him. In fact, later when the children asked why he wanted to be an actor he told them, "Well, as you can see from that video. I had a lot of energy. I had so much energy I didn't quite know what to do with all of this energy. And when I was about your age I realized that I loved being in front of people. I loved getting attention - like this! I still love it. I loved making people laugh. I loved singing and dancing and being silly in front of people."

He realized he wanted to be like the people he saw in the movies. He told them that as he grew he wanted to get better so he went to college, he learned and he practiced. A few children raised their hands to show that they wanted to be actors when they got older. It's heartening to think they might one day look back on this morning with Wesley with warm remembrance from their own Broadway dressing room. It could happen!


We talked a lot about SpongeBob - he even performed a bit of Plankton's speed rap - but, the children were also interested in The Addams Family. This musical was Wesley's second major role on Broadway (the first was Rock of Ages, which he says is his favorite because it represented the achievement of a dream). I know children enjoy a dark, eerie, silly storyline, so the plot of The Addams Family had lots to hold their attention.

Wesley autographed books for every child and then sat down on the floor to talk with some of the preschool students. They immediately tackled him.


Before saying goodbye Wesley was interviewed by Lindsey Christ from NY1 about Broadway Books First Class and how he came to be a guest artist. Wesley gave a terrific interview and Lindsey crafted a fantastic segment about the program, but for some reason Wesley's interview was not included. There is a shot of him signing books though.

Wesley went into rehearsals the next day for the Duncan Sheik musical Alice by Heart at MCC Theater. And has since completed Season 3 of his web series Indoor Boys. See, Wesley knows how to hustle.
Posted by Gary at 10:16 PM No comments: