Broadway Books First Class opened Year Three this October with a magical visit from Broadway guest artist Jonathan Freeman. Jonathan has worked steadily on the Broadway stage for the past 43 years and was even nominated for a Tony Award for his role in She Loves Me, but he is perhaps best known for his vocal performances - most notably Jafar in Disney's Aladdin.

Jonathan is also heretofore credited with (unknowingly) guiding Broadway Books First Class through rough waters after some unexpected changes occurred at the close of Year Two.

Last June, the misguided machinations of the administrative upper echelon almost brought the curtain down on my passion project. Their decision to assign me to teach preschool, instead of my beloved first grade, left me scrambling to figure out how to keep the integrity of the program intact. My vision for the program was for the visits to include my students.  How would a class of 4-year-olds sit for a read aloud and a discussion? 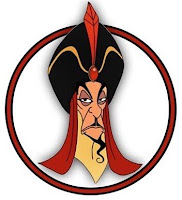 Luckily, I had a very kid-friendly performer waiting in the wings to usher in Year Three.

In addition to Aladdin (on stage and in the movies), Jonathan's resume includes Broadway roles in Beauty and the Beast, The Little Mermaid and Mary Poppins.

And his voice can be heard in the long-running children's television series Shiny Time Station, Hercules, and Lilo and Stitch: The Series (among others).

Jonathan's artistic oeuvre hinted at his capacity to embrace the wee ones and, in turn, provided an entry point from which to immediately hook a young audience. All of this prompted me to expand the scope of the program to include more students. So, Year Three's premiere saw my energetic preschoolers joined by the darling second graders.


I began to prepare for the visits long before Jonathan arrived. This included inviting the second graders to become "Book Buddies" with the younger children. Each morning, four of the second graders would join us to sit and read books in my classroom. This allowed time for everyone to become comfortable with one another and familiar with the environment. It also promoted excitement about literacy. The older children gained confidence in their reading abilities while the younger ones built up happy experiences around shared literacy events.

The classes worked separately too.

I read children's books about the theater to my preschool class, including Backstage Cat by Harriet Ziefert and Amadina by Sergio Ruzzier. They learned about various aspects of showbiz and the language associated with theater (e.g., scenery, props, etc.).

In both classes we studied Jonathan's work. I brought in artifacts (i.e., Playbills) from the shows he's appeared in and discussed the storylines from several of the musicals. I made connections to other Broadway Books First Class visitors (the program was recommended to Jonathan by Mary Testa and Nathan Lane) and, of course, showed video clips from Aladdin.

Armed with this background knowledge each class brainstormed a list of questions for Jonathan and we selected four to ask during his visit. 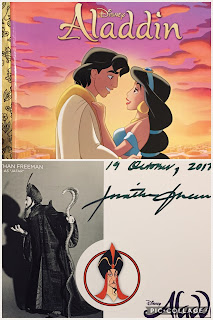 I also worked with Jonathan and his lovely, helpful friend Karen to coordinate the visit.

Jonathan suggested an Aladdin Golden Book for the read aloud. He even brought 30 autographed copies and showcards for every student!

This was incredibly kind and exceedingly generous. I knew it would be a spectacular visit. And it was!

The day finally arrived and everyone gathered together in anticipation of Jonathan's arrival. There were cheers when he stepped into my classroom (from the adults and children alike).

I've read that whenever Jonathan meets new fans they always ask him to "Talk like Jafar" and this crowd was no exception. Personally, I wanted to hear him growl, "Prince ABooBoo". He acquiesced and it brought me so much joy!

We had a front row seat to exquisite storytelling from Jafar himself! Everyone was engaged and throughout the story children passionately interjected, which was met with good-humored quips from Jonathan.

After the reading Jonathan laughingly turned to Joey and innocently asked, "Did you want to tell me something?"


In the question and answer segment that followed Jonathan stressed the importance of working collaboratively with others throughout the creative process. He noted that it takes about 150 people to make Aladdin run smoothly and that any theater production requires many parts working together.

He shared stories of starting out as Jafar 25 years ago and how his journey with the character allows him meet folks like us. His warmth, patience and humor were very endearing. He spent time with each child and happily chatted with the adults in the room, who loved him as much as the children did.


As I walked Jonathan and Karen down to the lobby they said that they would like to try to arrange for the children to see Aladdin on Broadway. This is a HUGE logistical undertaking on both ends but Jonathan is currently working with Disney and the House Manager to figure it all out.

Meanwhile, he sent the class a copy of the beautiful, clothbound book The Road to Broadway and Beyond Disney Aladdin: A Whole New World.

And I sent him a collection of thank you cards created by the children.

As Year Three of Broadway Books First Class continues I am extremely grateful that it began with Mr. Jonathan Freeman.

There are moments when you must listen to the universe and allow the tenets of the words "Follow Your Bliss" to wash over and direct you. This program is influenced by good people.

Jonathan, I thank you!
Posted by Gary at 3:43 PM No comments: