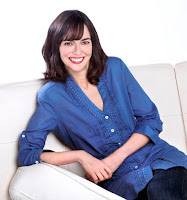 The article entitled His 'First Class' Idea: Bring Broadway to School is a fancy schmancy, bring-a-smile-to-my-face, piece that covers what transpired in our classroom during Gregory Jbara's visit.

Lenore captures a child's perspective on adult themes - I refer to this as poetic language in children - when a student refers to a graveyard as "the deadness".  Appropriate imagery with All Hallows' Eve just around the corner.

She deftly manages connections (between people, between time, and between situations) throughout the piece.  It is deeply gratifying to have Lenore's perspective and support on this new project.

Please check it out by clicking here.
Posted by Gary at 8:05 PM 3 comments: 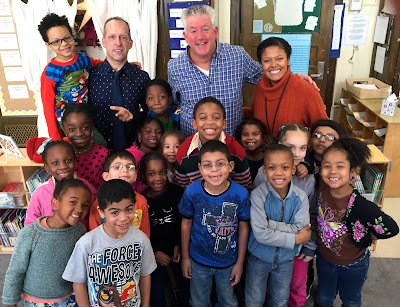 Tony Award Winning actors do not generally pop into first grade classrooms to read to the children.  However, that is changing thanks to my new literacy and arts project entitled Broadway Books First Class.

The tone of generosity and kindness was set this past week with a visit from Broadway veteran Gregory Jbara who took a break from shooting his hit television series Blue Bloods to read the children's book Creepy Carrots.

Anticipation for Greg's visit began two weeks ago as we slowly introduced the project and his work each morning.  We asked our students, "What do you know about live theater?" and inevitably, "How is it different from going to the movies?" Students shared and questioned, they talked with one another to deepen their collective and individual understanding and after several days of discussion and watching Greg in action - via the Internet and DVDs - formulated a few questions of their own.

By the time he walked through our door the children were bursting with excitement to meet Gregory Jbara.  In an unassuming and relaxed manner he introduced himself to each student by bending down and shaking each little hand.

After their "Oohhs" and "Ahhs" quieted he settled into a fun reading of the film noir influenced Creepy Carrots.


It became immediately evident to the educators in the room (my principal Dave and team teacher Oni) that Mr. Jbara knew his way around a reading.  He masterfully took the students on a journey while sprinkling the reading with those teacher staples of think-alouds and purposeful questioning.  His reading instantly became a model for fluency and prosody (another classroom reading goal).

Our students sat engaged and watchful throughout the reading and shared the unexpected, joyful twist of the final pages with our famous visitor.

The questions followed, and as I watched the children process his answers I became immediately impressed by their understanding of a world outside their experience.  For example, after describing the audition process and how directors/producers select just one performer for a role a student asked, "But what happens if you are both great?"

We discussed his thoughts about Billy Elliot the Musical (naturally) but our 6-year-old audience was particularly interested in his voice work for the Disney movie Tangled.  They even learned a new word - ruffian! 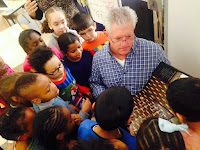 As the visit came to a close we presented him with a hardcover copy of Creepy Carrots that we all signed and a note of thanks. But honestly, how can we give enough thanks to this big-hearted man for sharing his time and talent with us?

He even stayed after the reading for almost an hour to talk with columnist/author Lenore Skenazy about his involvement with Broadway Books First Class (he was the first performer to say, "I'm interested") and his wonderful career. It is very telling of his genuine, down-to-earth character that he thanked ME for this opportunity!


I cannot imagine a better performer to kick off this project than Gregory Jbara.  The bar has been set high but with Broadway dancer Hollie Wright and Tony nominated playwright Charles Busch visiting next month I have no doubt the momentum will keep building.
Posted by Gary at 2:46 PM 3 comments: