What are the beliefs that fuel our actions? The motivation behind the decisions we make has been on my mind quite a bit lately. There are myriad possibilities for how to invest our time and the choice is ours to make. So, why do we choose one path over another? It has to rest with our thoughts about what is important. The actions we take give testament to those fundamental beliefs.

Jonathan Freeman, who currently stars as Jafar in Disney's Aladdin on Broadway and voiced the role in the 1992 animated film, certainly lives his convictions.

"It is the artist's responsibility to give back to society" he told me during his follow up visit with the children of PS347. "In other parts of the world young people attend classical concerts and shows for free (or with discounted rates), we need to make them more accessible for young people here too."

The third grade students attended a performance of Aladdin at the legendary New Amsterdam Theater in December. It was the first time many of them experienced the magic of Broadway. What a perfect show to introduce them to Broadway! The children have been learning about Broadway through my program Broadway Books First Class since they were in first grade. To have an opportunity to attend Aladdin and then have a question and answer with one of the stars afterwards will hopefully establish a lifelong appreciation of the Arts.


In addition to the mechanics (i.e. makeup, costumes, staging) the children learned about the history of Aladdin. This includes the decisions that went into the development of the story, including the fact that there are no animals in the stage version. We also discussed the origin of the story of Aladdin from The Arabian Nights and the historical influences that shaped it. For example, it was set in China because thousands of years ago this was an exotic, distant place and things like magic lamps and flying carpets could not really be disputed. 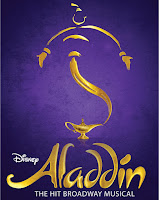 Jonathan wrapped up his visit by talking about the impact live theater has on us.

He told us, "Almost any show that you see live is going to have the same or similar effect on you. It attacks your emotions in a lot of different ways and your creative minds. And that's what's important about live performance, like I said whether its music, dance, acting, singing, it's important. So, I am very happy that you came."

Beautiful. There is no telling the seeds you are planting in the young minds and hearts in your classroom through exposing them to the magic of Broadway, and the joy of books. It is a great work you do, and I love that I can bear witness to it here.