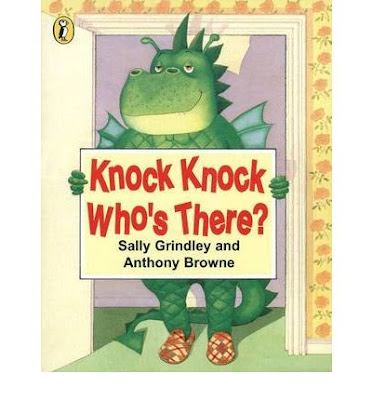 Knock Knock!
Who's there?
Wrestler.
Wrestler who?
Wrestler is going to jump on you.

But no matter how random or unplanned these 'jokes' are they always explode with laughter when they hit the punchline.

Knock Knock!
Who's there?
(Child looks around the room for ideas - long pause - big smile...)
Blocks.
Blocks who?
HAHAHAHAHAHAHA!

They didn't even finish that one and the whole table full of five-year-olds is hysterical.

Knock Knock!
Who's there?
Orange.
Orange who?
Orange you going to come under the door?

Milk is coming out of their little noses, their hands are banging on the table, eyes wild with glee. I don't get it. Oh, orange is like aren't so at least this one is getting closer to making sense. Although why would I come under the door?

The jokes may be lacking but the intention is clear. These children want to have a good time and they know how to make it happen.
Posted by Gary at 9:04 PM

I could never remember jokes, even as a kid, but I always laughed at Knock, Knock jokes, because they were just supposed to be funny.

It's nice when kids are laughing at a joke instead of another kid.

So how is it going..?
Sounds like you are feeling pretty natural back with the little ones.
Love the jokes!
I think it is really great when you realize that some of your best times this year will be spent with little people who have only been on the planet the past 5 years!!
How many do you have?
B.

Barbara - I am terrible at jokes as well. I can never remember the punch line and I take too long to set them up. My twin brother is the opposite. He remembers all of them and is constantly sharing.
But I do remember laughing my ass off at knock knock jokes when I was little and they were no better than the ones the kids shared today. That is probably why I got such a kick out of them.

B - It is going well. I am already in love with my class and look forward to the next 9 months. Hopefully they will move to first grade with me next year (that is unless I fall in love with teaching kindergarten and decide to stay there). We have 15 students at the moment but are expecting several more. You have 18 don't you? I am hoping for around that number. How are things going with you? BTW - I put your 'taking care of books' presentation on my class page (our website). Thanks!

Here's a couple for your class:

Is a bell necessarily on a bicycle!

Look, I just flew in from Cleveland and man, are my arms tired. ;)

Ha! I am inexplicably laughing too -- and I don't understand those jokes at all!

It's a shame that so many adults lose that sense of humor that these kids display. I'm 35 and still easily amused by the simplest of jokes.

I found your blog through Sebastien.

I love when kids make themselves laugh. It's priceless. :)

How are you loving your new class of kiddies?

knock knock
who's there?
nicholas

wow, thank you all for your super-duper, kid friendly Knock Knock jokes. It is hard not to laugh at them.

Arielle - I am loving kindergarten. It is such a difference from first grade. The kids are all impulse, excitement and id. Happy, happy classroom. This does not mean that I don't also adore first grade but it is a welcome change after 6 years in the same grade.

Good to see you are adjusting to teaching Kindergarten!
Best Knock Knock Joke:
A: Knock, Knock
B: Who's there?
A: Euripides
B: Euripides who?
A: Euripides trousers, you pay for dem

I miss teaching with you this semester but I don't miss the hectic pace. It's nice to have a break. Love to the family!

Aren't litle children and knock knock jokes just the funniest.... I sometimes get sad when they eventually 'get it' and tell them right LOL

Your a peein' your own pants.

Okay, maybe that one's not appropriate for first graders.

Gary that is so great. I am reading about dyslexia and your post came up. Happy to see someone else that enjoys teaching.

Rose tried to make a Knock-Knock joke towards Dorothy, and all she got back was a "OH SHUT UP ROSE!"