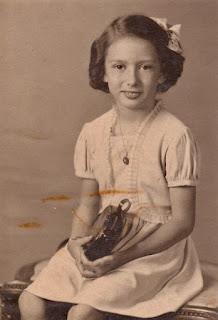 In the haze of memory, it seems melancholy and joy swirl and blend in unpredictable ways. One moment a memory makes you smile and the next it leaves you feeling lost and alone. You want to remember and forget all at once. None of it makes sense. Such is grief. You can't go over it, you just need to go through it.

It's said that scents or smells can bring you back to a time and place. The same can be said for language. A turn of phrase, an oft-repeated saying, or a colloquialism lovingly brings to mind the person who said it. And with those few familiar words, we are transported back in time to feel the feels associated with it.

My mom (pictured above as a little girl) had a slight lilting accent born of West Virginia and Ohio. I used to tell her she sounded like Dolly Parton sometimes when she'd leave me voice messages. Although, it seemed much less prominent in person - except when she'd say "warsh" instead of "wash" and things like "prit' near" or "I reckon."

I've adopted some of my favorites into my vernacular. There is "God willin' and the crick don't rise" and "I see said the blind man as he picked up his hammer and saw" - the latter took me a minute to grasp the first time I heard it. These are clever turns of phrase that are deceptively meaningful. Or they mean nothing at all. That's the beauty.

Then, there was the time we drove through a small town in West Virginia and she said it was a "poke-and-plum" town. What? She explained, "You poke your head out the window and you're plumb through town." I found that endlessly amusing.

She described her time in the Marines as "Hurry up and wait." I hadn't heard that expression before, but I hear it all the time now.

There are words we just didn't use in New York that I'd hear when we visited Ohio. Words like davenport (couch), pop (soda), and bawling (crying).

Nobody close to me uses these words and phrases anymore. I miss hearing them. My mom used to say that information died with the folks who remembered them. She said she'd reached a point where she couldn't ask anyone things about the past anymore.

In what turned out to be the last time I saw my mom, I recorded a conversation wherein she talked about her grandparents in West Virginia, her childhood, meeting my dad, and the early days of their marriage. Her story in her voice. I'm so glad to have it. I reckon it was prit' near perfect.

Email ThisBlogThis!Share to TwitterShare to FacebookShare to Pinterest
Labels: memories

This is so very beautiful, Gary. It captures your mom’s vibrancy through remembered language. She must have been wonderful to know.

Thank you. I read your posts filled with love for your family though every stage of life and, including loss. I try to remember that we are blessed to feel so strongly, even if it brings pain and heartache sometimes.

Beautiful story Gary, she is always with you